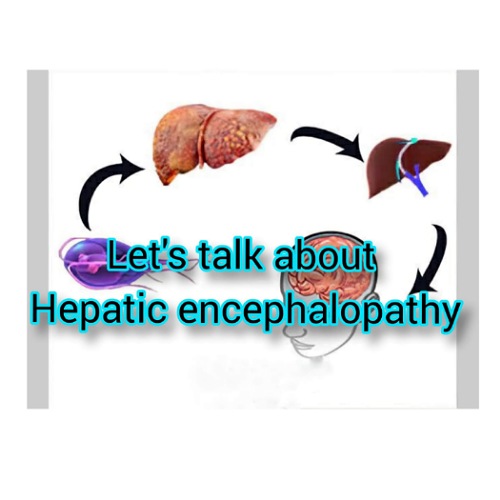 ▶Encephalopathy, the term in short means, damage of the brain function and if this damage was due to any liver cause, it becomes hepatic encephalopathy.

▶Cause:
It is usually either due to,
➡ Liver failure due to chronic liver disease, or
➡ Portosystemic shunt.

The basic pathology here is, due to lose of liver function, liver is unable to metabolise the nitrogenous waste substance like ammonia into less toxic urea. This accumulating ammonia (produced by protein breakdown by colonic bacteria) reaches the brain through the portosystemic shunts. They cross the blood brain barrier (BBB) and act as a neurotoxin.

▶ What are the nitrogenous waste materials?

▶ How does liver detoxify this nitrogenous waste?

✔ The nitrogenous wastes are converted to urea through urea cycle/ ornithine cycle which is then excreted through kidney in urine.

🔹The most important clinical sign that indicates hepatic encephalopathy is ‘flapping tremor’.

🔹Other signs are:
✔ Fetor hepaticus
✔ Constructional apraxia (demonstrate by asking patient to draw a start and he won’t be able to construct a proper star)

▶Diagnosis is mainly clinically but Electroencephalogram (EEG) can be done.